All ITASEC20 scientific and technical sessions, stakeholder and vendor sessions, workshop and tutorials will be held from February 4 to February 7 at the Faculty of Engineering of the Polytechnic University of Marche, Via Brecce Bianche 12, Ancona.

The ITASEC20 welcome ceremony will be held on February 4 at the Mole Vanvitelliana of Ancona.

The ITASEC20 social dinner will be held on February 6 at the Teatro delle Muse of Ancona.

The nearest airport is “Raffaello Sanzio” in Falconara, 19 km from Ancona. The airport is well connected with Munich and other EU hubs.

There are many trains from all over Italy which stop in Ancona.
The railway station (Ancona) is at a 1 km distance from the town center, where several hotels are located.
There are taxi and bus stops in front of the station, connecting you to the whole town and neighboring villages.

The port of Ancona is a few meters away from the town center.

Ancona can be reached through the A14/E55 motorway exits “Ancona Nord” or “Ancona Sud”.

There is an App for public transport, including domestic connections integrated with the local travel solutions, buses, and trains. It can also be used for paying transport services. 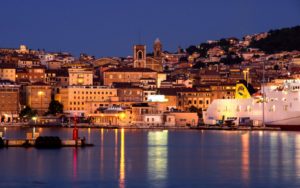 Ancona is the administrative centre of the province and of the Marche region. It overlooks the Adriatic Sea and it has one of the biggest italian harbours as well as several beaches. It is a city of art, with an historical down town full of monuments and with a thousand years old history; it is one of the most important economic centres of the region and the biggest town in dimensions and population. 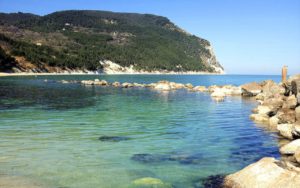 The city has several beaches. The most central is called Passetto, with large white rocks; gravel beaches are towards the south of Ancona. From Ancona, the first port of call is Portonovo (Blue Flag 2016), the smallest retreat on the Conero Riviera. The bay of Portonovo is one of the prettiest white pebbled beaches on the whole of the Northern Adriatic shore. The strand is split in two by the Fortino Napoleonico, a squat, blank-eyed fort built in 1808 by Napoleon’s Italian Viceroy to fight off English ships. It is now a most singular hotel. At the end of the road, where the evergreen oaks that smother the mountain come down to the sea, stands the early Romanesque church of Santa Maria. Built between 1034 and 1048, its curious form is unique in Italy and looks as if it might be more at home in Normandy. On the bay, often crowded, there are few restaurants with a breathtaking view balcony serving fish dishes. “Della Vela” beach is a spectacular beach with a rock, shaped like a sail. It is a free public beach, at the very end of the south versant of the bay. The beach of Mezzavalle adds a touch of wilderness and scenery to the beauties of the bay. To the north of the port of Ancona is the sandy beach of Palombina, with shallow sea water. To the southwest of the port of Ancona is the well equipped marina “Marina Dorica”, including 1200 berths. 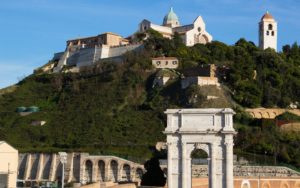 The most representative monument of Ancona is the Cathedral of San Ciriaco, a pleasant mix of Romanesque, Gothic and Byzantine syle, built on the foundations of a temple of the fourth century B.C. and a pre- Christian church. The most remarkable tourist attractions are: the Church of Santa Maria della Piazza, a masterpiece of Romanesque art, with its impressive facade ; the Arch of Trajan, a Roman arch erected in the first century A.D; the Church of San Francesco alle Scale, with its beautiful facade in Venetian Gothic style, the Mole Vanvitelliana, a former pentagonal fortress, buil by Vanvitelli and now hosting shows, art exhibitiosn and concerts in summer time; 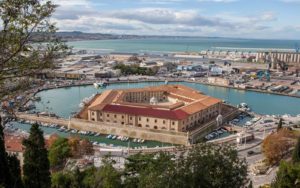